Already in 2017 we got an offer to take over Texas (Superior Son or Larry). But we actually didn’t need extra horses at that time. Several times we had contact with the owner and we could also take over a Quarter horse from them. And finally in July 2018 we had the feeling that we should go and take a look at this 165 cm big American Paint gelding from 2008.

Of course, we immediately fell in love with him, the sweet giant boy with 2 blue eyes. Unfortunately he didn’t want to get on the trailer. So Anders walked with him for 80 km to come home.
Once at his new address and introduced to the herd, the training started. He was supposed to have experience with riding in the paddock and outside but it turned out that Texas was very insecure with the saddle. We could get on his back, after lots of training and rest.. But once we where on his back, we couldn’t get off… That was something we have never seen before.. It must have happened something to him in the past (like something was stuck ..).
So we continued the training without saddle and that was going really good. He still has a lot of training hours to do. Yet he regularly has a panic attack and starts a rodeo… That is of course not the intention…

We thought we had found someone in May 2020 who wanted to do groundwork with him and could also ‘communicate’ with him. And not such pleasant experiences from the past emerged there during those communication with him. In the end, she found his short temper to be too difficult and excited to deal with. So he came back in October 2020 and was then called Spirit (instead of Texas). He had indicated that name himself in one of the ‘conversations’ with her. We will continue with straightness training but the starting point is not necessarily to ride with him. He is also a very sweet guy who likes to have attention but finds it a bit exciting. It is also a spiritual horse who will be teaching and contributing to the ranch in other ways. 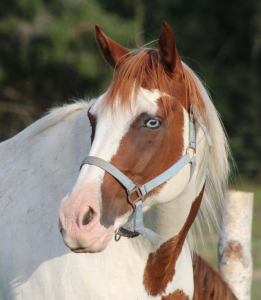