On the 8th of June 2018 we had our 10th year anniversary and we where honored by Hagfors Kommun. In addition, we had a big party at the ranch with Indian dancers and different bands and activities for all visitors.

Sun Dance Ranch has been nominated for the Tourism Prize in Värmland 3 years in a row. In 2016 both for the ‘rookie prize’ and the tourism prize in which we both times ended at the best of 3 and where allowed to come on stage.
In 2017 we are even nominated as Värmland’s tourism company for the large Swedish tourism prize and we were invited to go to Stockholm as one of the 17 best tourist companies in Sweden. What an honor!!!! And what a great experience to be on stage together with the Minister of business, Mikael Damberg, and to be honored with this award. Unfortunately, we did not win but only to be on that stage was such a big profit itself!
Then after the award ceremony we were invited by Hagfors kommun for a dinner in Stockholm. There has never been a company from Hagfors kommun nominated for the great tourism prize. What an honour!
And also later all the attention from the media and the newspaper with interviews etc. was overwhelming. We have celebrated it at home once again with a nomination party with a cool bluegrass band and various guests. How proud we are!!

Article in the Lucky Rider magazine

The largest Scandinavian western magazine has made a 12-page article about us.

In December 2016 at a lunch meeting from Hagfors Kommun and the Handelskammaren Värmland (the chamber of commerce) and we where once more invited to an interview and of course we told our story again. 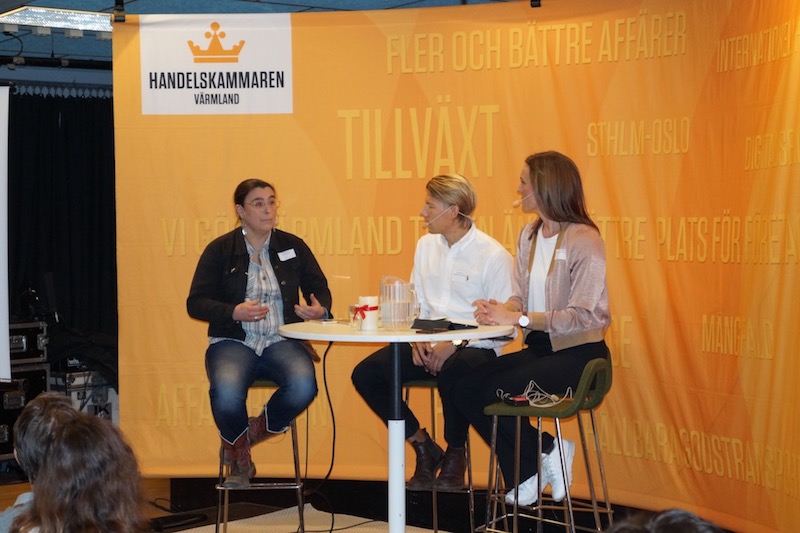 The 22nd of August 2016 after the episodes from ‘With Four In Bed’ we were contacted by the newspaper. Because we had won ‘ Met Vier In Bed ‘ we were suddenly also real life size on the front page of the newspaper Värmlands Folkblad! 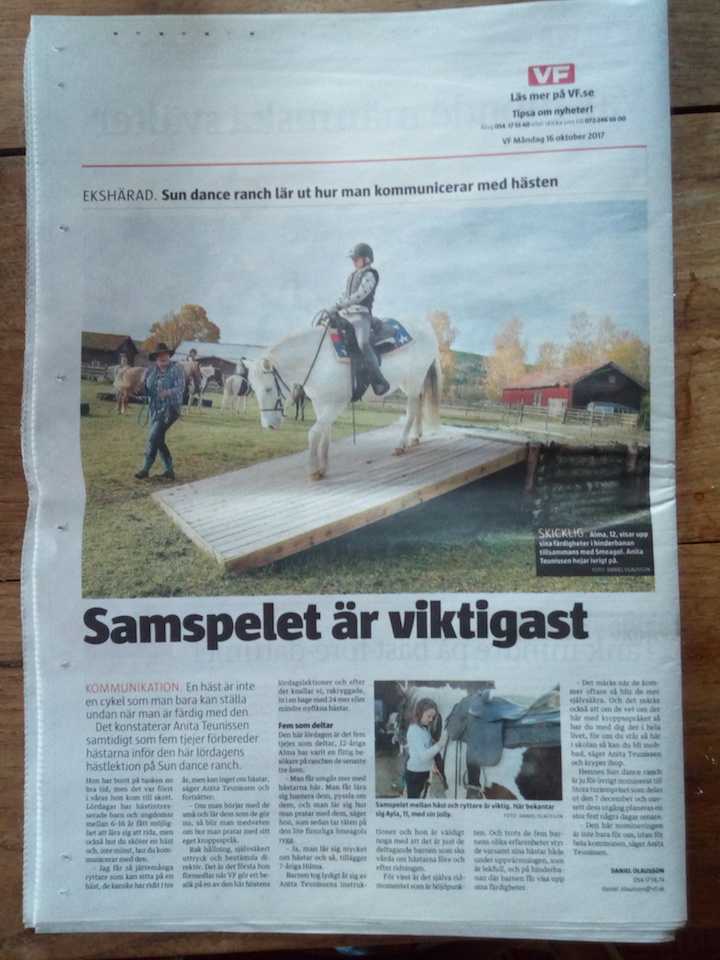 In November 2016 we where again contacted by the Swedish radio, (P3 this time) and we did again a nice interview!

The 25th of July 2016 Fernandoz (one of the best known Swedish dance orchestras with many country songs) came to the ranch to visit us and for a photo shoot and recording the videoclip for their new CD!

The 7th of July 2016 we had an American country singer visiting the ranch, the one and only Doug Seegers! He is known from the Swedish TV program ‘Jills veranda’. He was a homeless street musician in Nashville that was discovered by the famous Swedish country singer Jill Johnson. She has recorded a cd with him and went on a tour through Sweden. He is now well known in Sweden, but he’s also been in the Netherlands and many other countries. He came in Hagfors municipality the 7th of July 2016 for a performance in Uddeholmsladan and just before that, he visited the ranch. He and his entire management team had dinner with us. He was looking around in the shop and of course he also sat on a horse! Doug even made plans with his manager to make a western film at Sun Dance Ranch! We’ll see if that will happen….

The 29th of June 2016 we had a visit from the Swedish radio P4 for a live broadcast of their program ‘ Sommarluffen ‘ with multiple interviews of staff and guests. Of course, we put one of the reporters also on a horse for a live report from the horse back!

In response to the radio program we were contacted by ‘ Expressen ‘, one of the largest Swedish newspapers that wanted to do an interview. They provided us with a nice online article about horse coaching and they also added a nice video on their website!

In June we travelled 10 days through Sweden. We drove around for the recording of the Belgian TV program ‘ with four in bed ‘. This is a program about different B&B’s in Sweden. We and 3 others B&B owners went to each others B&B and we had to judge them on several points. After visiting the 4th B&B, all the points where counted and the winner announced, and what happened? The other B&B owners had reviewed the ranch as the best place and we won the competition!!!!

More about Met 4 in bed

In 2015 Bit wrote a super nice article in their magazine about the ranch. And also the year after they found us again! So Gjilke and Sabine where interviewed for the online headline “my horses dream in… ‘ where they both have told their story. They also have contacted us for their online article about suggestions for riding in the snow. 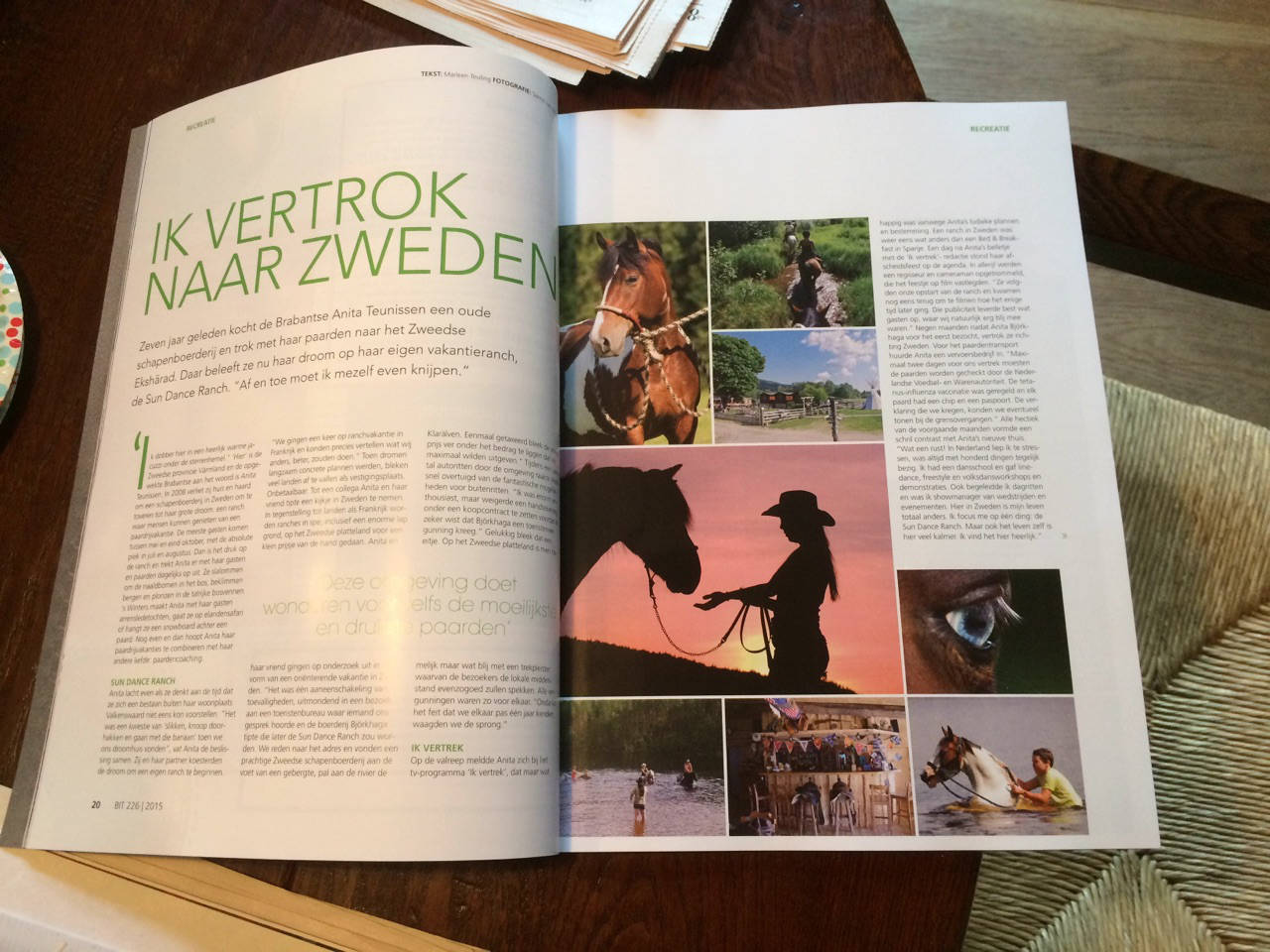 From May 2008 we where followed in the Netherlands by programme makers of ‘Ik vertrek/Stokvis productions’. They followed us from the last working day, goodbye party, moving to Sweden and until the official opening of Sun Dance Ranch on May 23rd 2009. The team was in Sweden for 3 times filming and we have submitted the necessary full tapes ourselves. Of all this a documentary of about 1 hour was made and broadcasted on TV in November 19th 2009.